Voices: an exploration of Black Las Vegas through the resources in UNLV Special Collections and Archives: Jackie Brantley & Faye Todd

Individually, Jackie Brantley and Faye Todd had successful careers as intelligent, independent women navigating the Las Vegas gaming industry. Together, they represent a small but influential number of African American women who achieved executive status in gaming during the 1970s and 1980s, leaving a lasting legacy on the industry and setting examples for young Black women to follow. In addition to rich and fulfilling personal lives, both Brantley and Todd built strong careers on their own. But, as Brantley remembers, the time the pair worked together at the Desert Inn was special. “She [Todd] was working there when I first started working there,” Brantley recalled. “She was one of the first wonderful people that I met and she was so very helpful to me. We just got very close and very comraderish because we knew that if we didn’t, it was survival. It’s commonplace to live with paranoia in a hotel because you never know when you’re going to get tapped on the shoulder and your time is up.”

Jackie Brantley and the Westside

Jackie Brantley grew up in the Westside, frequently referring to it as a “village.” Brantley speaks highly of the nurturing community that took care of each other, especially her grandfather who treated everyone with respect - old and young, neighbors, and even strangers passing through town -- and “in giving respect, he got the respect back.” Throughout her life and long career, Brantley drew on her grandfather’s example of hospitality and credits growing up around such individuals as part of her success.

“The Westside was our village and it was a town where everyone knew everybody,” Brantley said while looking back on her childhood and time spent growing up on the Westside. “The teachers intertwined with the parents and the neighbors intertwined with the parents and the teachers. And the church had a role. It was just one wonderful place to grow up in -- here in Las Vegas.”

Even though Brantley noted the neighborhoods and schools were segregated, growing up she remembers attending school and having neighbors of varied backgrounds. In her 1996 oral history interview, she talked about the Westside being “one of the most prime, probably the most valued piece[s] of property in the entire city because it is the hub of the city. It is the heart of the city.”

Brantley married her then-husband, Joseph, right out of high school and started working as a maid. She transitioned to working clerical jobs and worked for various organizations around the city including the Clark County School District, until she sought more creative work in the casino industry. In the 1970s, Brantley worked as a Public Relations Specialist for the Desert Inn Hotel & Casino. Eventually she moved up into a position that allowed her to use her creative skills. This job put her in close contact with celebrities and entertainers of the day. Brantley was passionate about her work and it brought her increased responsibility. Her work included ensuring press releases were delivered to local media outlets, coordinating with advertising agencies, and drafting contracts for entertainers such as Nipsy Russell, Bobby Gentry, Foster Brooks, and Wayne Newton. Being a young Black woman in the predominantly white male executive suite, Brantley had to work hard to earn and keep her prominent role within the industry.

“Of course me, being a very proud, Black woman, I pride myself in the fact that I never had to sleep with anyone to keep my job or to get my job,” she said. “I’ve had people, even Alex Haley, ask me, ‘How did you get here?’ And I told him I got here because I was talented and I’m staying here because I’m talented.”

After years of working full-time in the entertainment industry, going to school, and raising a young child as a single mother, Brantley was burned out. So in 1978, she quit her job to spend more time raising her son and caring for her aging mother. She returned to her “roots” on the Westside to regroup, but soon found herself jumping back into work, this time in public relations and modeling outside of the gaming industry. Brantley worked for three years with the Nucleus Associates, utilizing her professional skills and knowledge of the Westside to help make Nucleus Business Plaza a reality.

Brantley, a native of Las Vegas, is proud of her hometown and works tirelessly to ensure that the legacy of the African American community’s impact is not omitted from the region’s history and is included in discussions of the future of the Westside. “African Americans played a major role in the structure of the state of Nevada, not just Las Vegas,” Brantley said. 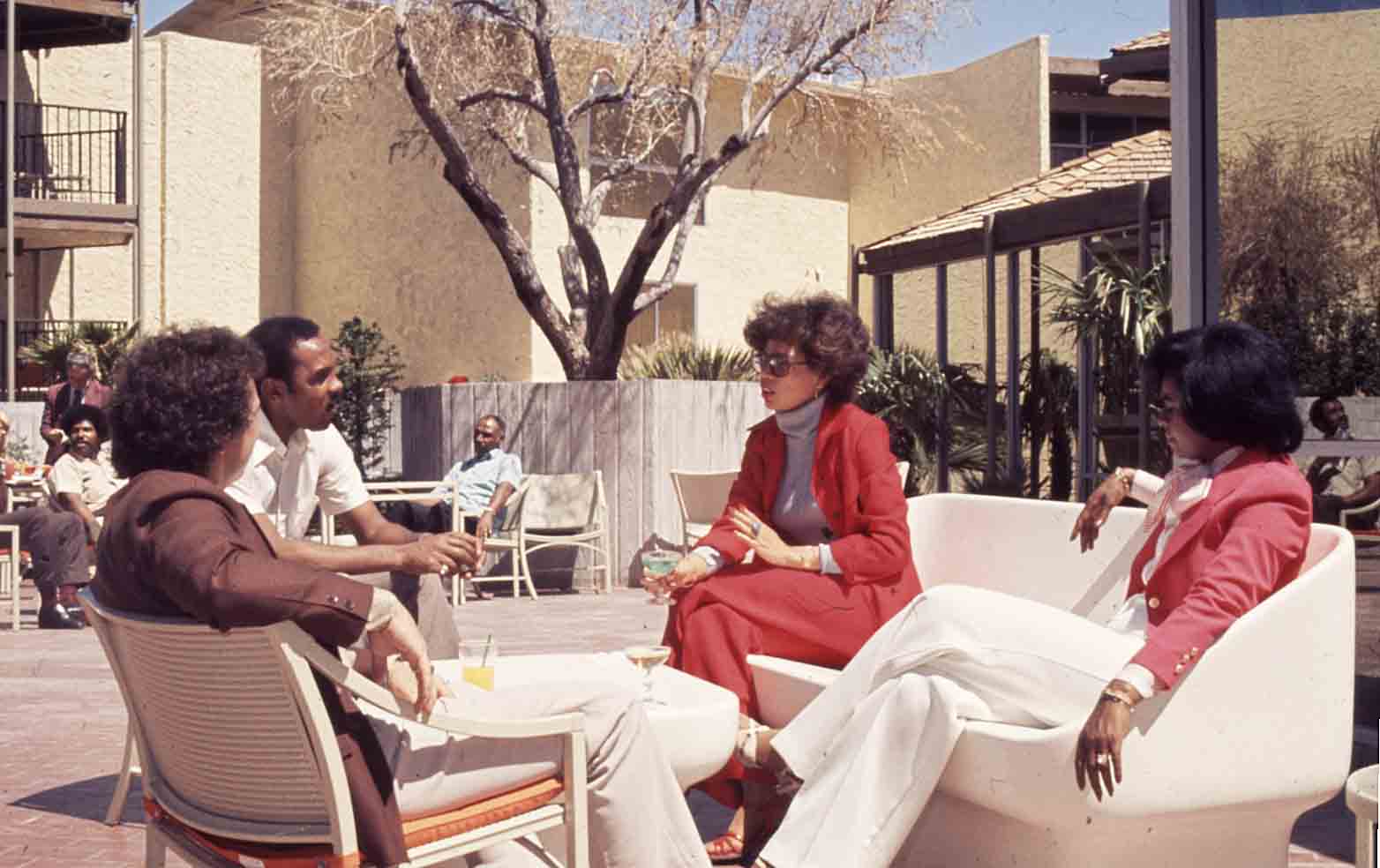 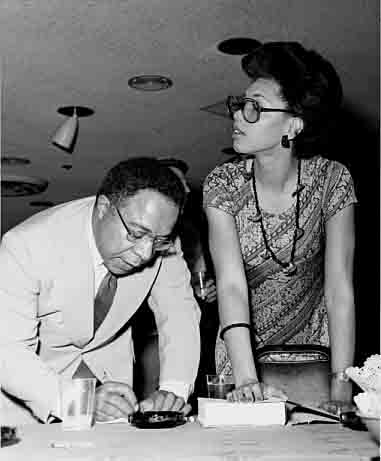 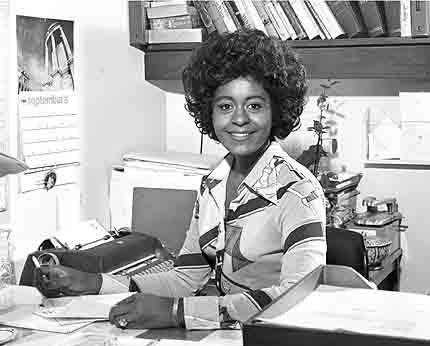 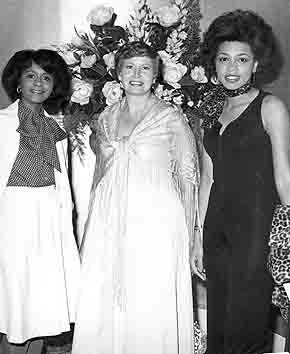 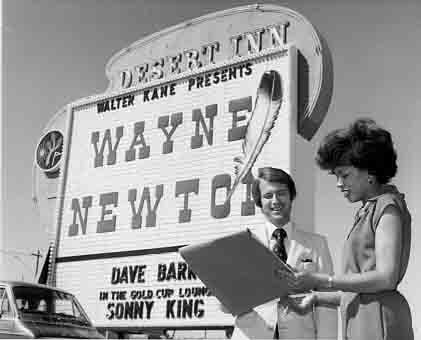 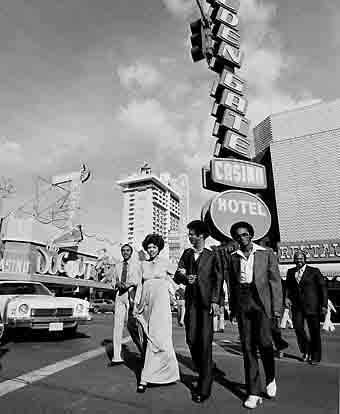 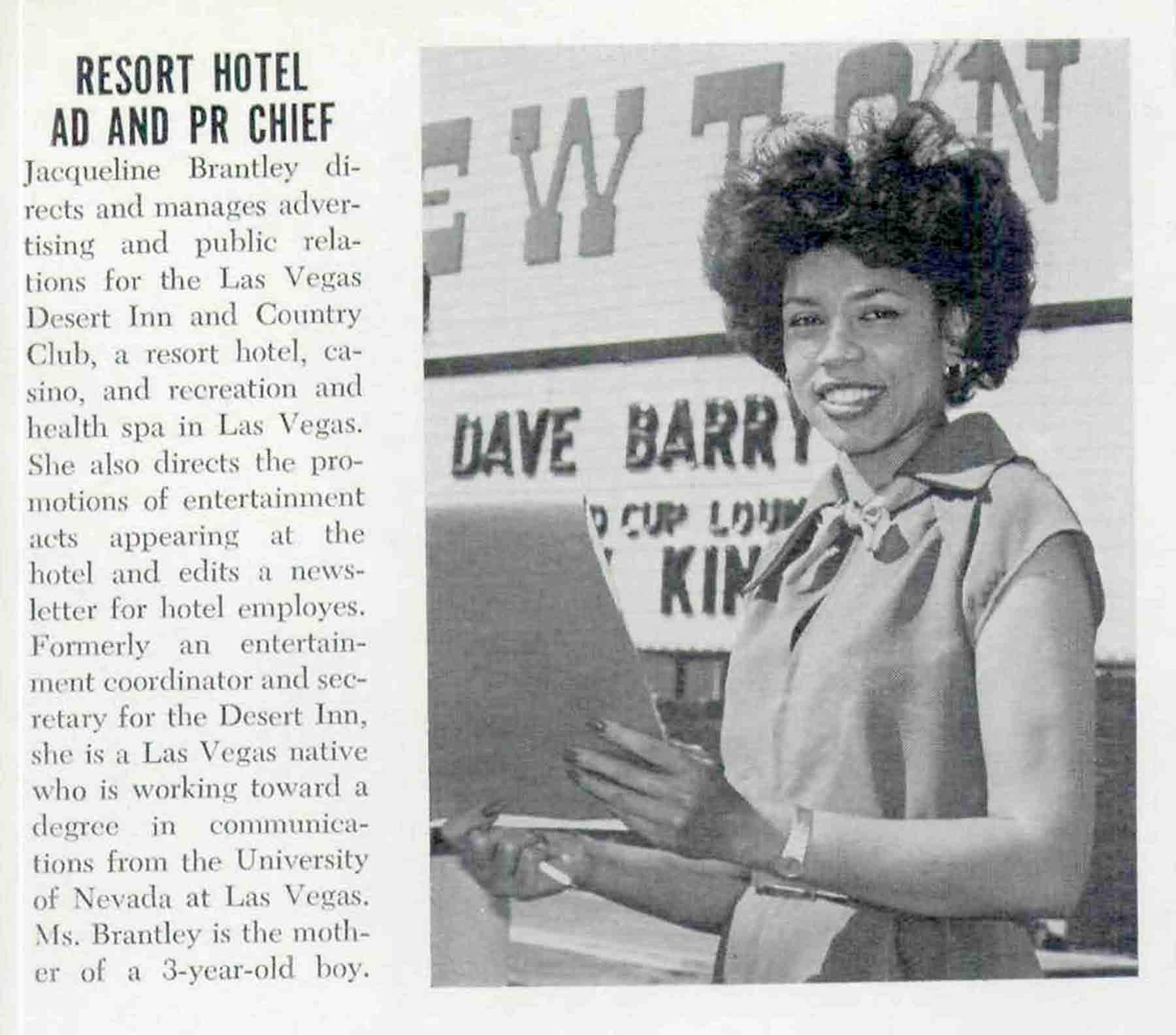 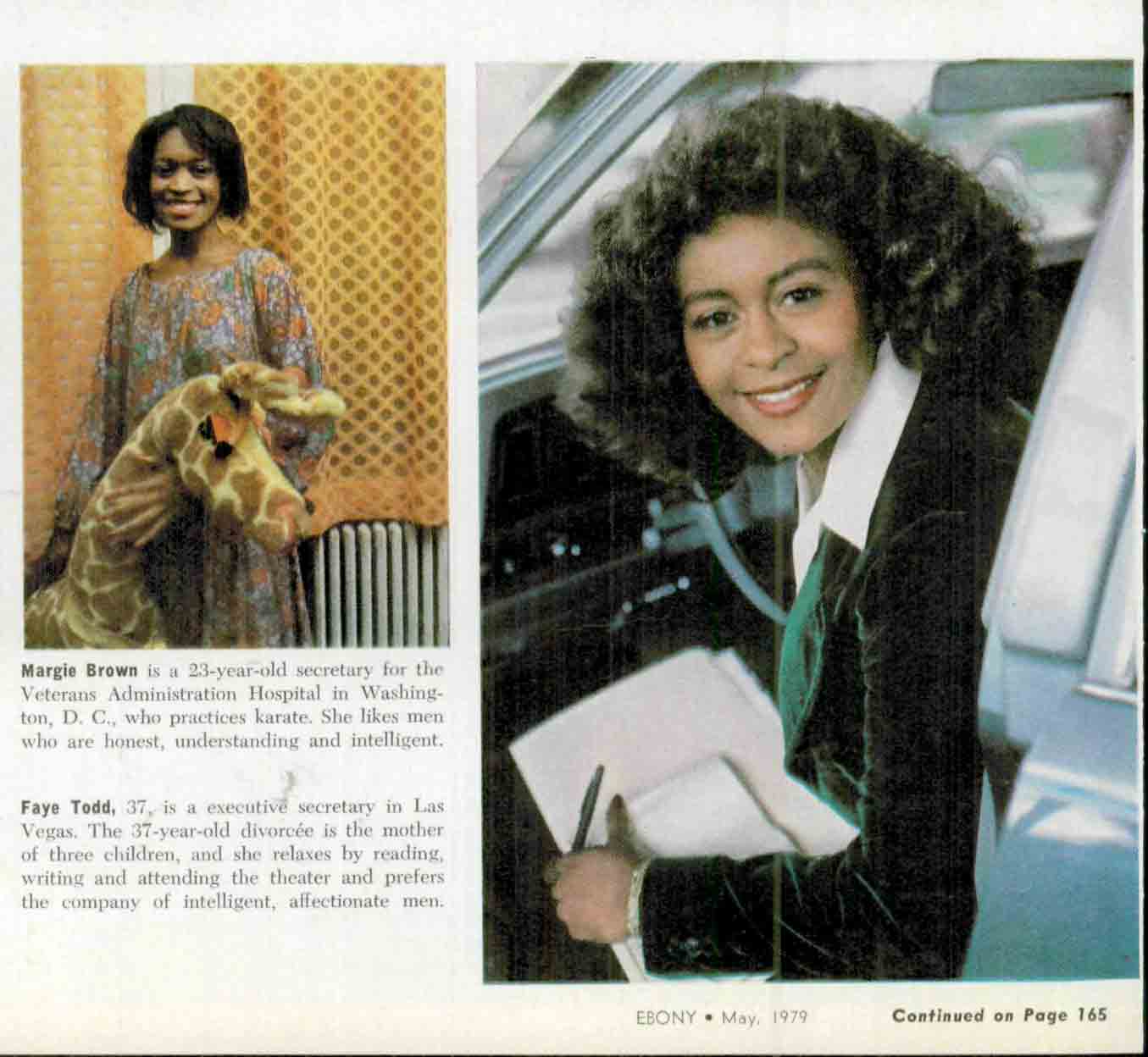 Faye Todd blazed a path for both women and Black women in the gaming industry, rising to elevated positions with the Desert Inn and the Landmark hotel-casinos. With her three children and a husband, Todd arrived in Las Vegas from San Antonio, Texas in 1964. It didn’t take long for her to notice a difference in race relations.

“To me, I felt more of the segregation here in Las Vegas than I did in San Antonio,” she said in her 1996 interview. “Some people say that it’s better because of the location out West, but for me it was not that way.”

So different was Todd’s racial experience in Las Vegas that she clearly recalls when and where she first encountered a white person using the n-word towards her. The incident on Fremont Street, where she had gone to buy an outfit, left her bewildered and depressed. “I was startled,” she said. “Very hurt. I didn’t know, it was a strange feeling. Very strange. I felt like crying. Of course I did cry. I can remember I was down there shopping. We had the dress shops and things in that area at the time, on Fremont Street. It was a particular outfit that I was going to buy but I no longer wanted anything to do with shopping. I pulled the car out [from the parking spot she just pulled into] and came home. I was depressed, very depressed. That was the first time I’d ever heard it -- you know, out of the mouth of a white person.”

This wouldn’t be the last time Todd would face racism in her life and career. In the late 1960s, she enrolled in adult education classes to acquire necessary clerical and business administration skills to get a job working on the Strip. Todd briefly worked at the Dunes Hotel in the early 1970s but the hotel had an unwritten policy. “I had heard, after I got the job, that several Black women had been in that particular office and they’d work a little bit, then they’d let them go,” Todd said. “So we figured out what they were doing. They were trying to fill this quota. This was during the time that they had the consent decree. They needed to fill the quota. So they would fill the quota and then let them go. Their excuse was, ‘We tried it but it didn’t work.’”

When the day came for her to be fired from the Dunes, a devastated Todd finished her work and then told her boss, who had just fired her, “Thank you for the opportunity.” Todd knew that others who had been fired and reacted differently.

“I had heard that a lot of the girls had cursed him out because they knew it was not fair,” she said of the day. “They had said, ‘Oh, you’re this and you’re that.’ But I thought, ‘I’m going to be a lady about this.’ I knew it was unfair. It was just unjustified… Even though I knew he [her boss at the Dunes] was wrong, it was no good for me to jump up and down and scream. I was fired. He wasn’t going to take me back.”

The way Todd handled that moment would set the stage for the rest of her career. During an interview at the Desert Inn, she found out that her old Dunes boss had given her “the best recommendation I’ve ever heard,” according to the person interviewing Todd for the new position. She would get that job and by 1975, her career in the industry was gaining momentum, and she was promoted from Executive Secretary to Special Events Coordinator. It was Todd’s responsibility to arrange events like golf and tennis tournaments, while working closely with upper management and companies that would sponsor fundraising events.

In 1978 Todd left the Desert Inn because she could not refuse what she called “the perfect job” at the Landmark Hotel and Casino as Entertainment Director/Corporate Executive Assistant. While at the Landmark, Todd represented the hotel’s owners, making high-level decisions and running the daily operations of the hotel. Todd not only managed existing entertainment and shows, but also created and produced her own show, Spellcaster. Unfortunately, the job ended six years later when the Landmark was forced into receivership. Todd moved to the Sahara until leaving the gaming industry in 1997.

Todd’s career broke many barriers. Her legacy blazed paths for both Black women and women in general. “As Entertainment Director, I was the only woman on the Strip in the history of Las Vegas [doing that job],” she says of her time in the industry. “The only woman, so I was taking up two [firsts] -- Black and a woman. There had never been a Black entertainment director in Las Vegas and there had never been a woman [director]. I was the only woman.”